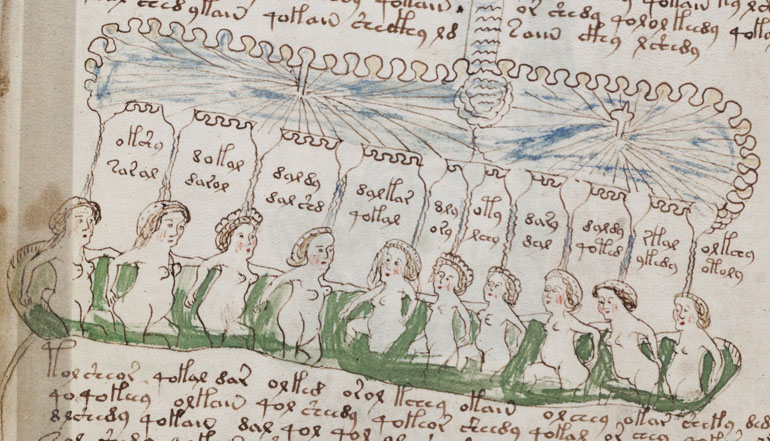 The Voynichese project (VP) defines a simple syntax for querying words in the Voynich Manuscript. While this syntax is only used internally, by the VP's query processor, it's important to be aware of how it operates in order to effectively query the manuscript.

Note that, unlike most query languages, Voynichese queries are evaluated at the word level. As such, word delimiters like whitespace and punctuation are not allowed.

Voynichese queries may use the following characters:

The characters a-z each match the corresponding EVA character.

The wildcard character "*" matches one or more EVA characters. Note that the wildcard may also be represented as a dash "-", for example when used in an URL.

The "^" character matches the start of a word.

The "$" character matches the end of a word.

For example, the query ^daiin$ will exactly match the EVA word daiin, whereas the query daiin (excluding the ^ and $ symbols) will match any EVA word containing daiin, such as chodaiindy.

The papers summarized here are mainly from 2017 onwards.
Please refer to the Survey paper(Image Aesthetic Assessment:An Experimental Survey) before 2016.

Comprehensive overview of existing tools, strategies and thoughts on interacting with your data

TLDR: when I read I try to read actively, which for me mainly involves using various tools to annotate content: highlight and leave notes as I read. I've programmed data providers that parse them and provide nice interface to interact with this data from other tools. My automated scripts use them to render these annotations in human readable and searchable plaintext and generate TODOs/spaced repetition items.

In this post I'm gonna elaborate on all of that and give some motivation, review of these tools (mainly with the focus on open source thus extendable software) and my vision on how they could work in an ideal world. I won't try to convince you that my method of reading and interacting with information is superior for you: it doesn't have to be, and there are people out there more eloquent than me who do that. I assume you want this too and wondering about the practical details.

The “Research” section on this website represents the in-the-making process of the What Music Really İs manual as an interactive presentation, book, and featured documentary. It wishes to be the scientific & mystical knowledge base on the science of music: harmonics, sound, acoustics, tuning and all else related.

“What Music Really İs” is a statement. It is not a question, and not a theory. It is a fact. “What Music Really İs: The Manual for The 3rd Millennium Musician, Spiritual Seeker and Free Energy Discoverer” together with “Harmonic Series Hearing Study for the Liberated Ear”: the only True Ear Training lessons for the development of Perfect Aural Frequency and Harmonic Sonic Distance Recognition are currently the single resources that present music for what it really is, without points of view or centers of interest.

All the concepts presented here are not the result of historical practice, do not adhere to any philosophy, are not linked to any school of taught and do not specifically endorse any form of institutionalized, academic- or esoteric-type of content. The form in which all facts are presented does not make use of any standard (modern or ancient) music theory or nomenclature.

Frankenbook is a collective reading and collaborative annotation experience of the original 1818 text of Frankenstein; or, The Modern Prometheus, by Mary Wollstonecraft Shelley. The project launched in January 2018, as part of Arizona State University’s celebration of the novel’s 200th anniversary. Even two centuries later, Shelley’s modern myth continues to shape the way people imagine science, technology, and their moral consequences. Frankenbook gives readers the opportunity to trace the scientific, technological, political, and ethical dimensions of the novel, and to learn more about its historical context and enduring legacy. New research reveals why people like to reread books, re-watch movies and generally repeat the same experiences over and over again. It’s not addictive or ritualistic behavior, but rather a conscious effort to probe deeper layers of significance in the revisited material, while also reflecting on one's own growth through the lens of the familiar book, movie or place.

The concept of multiple discovery is the hypothesis that most scientific discoveries and inventions are made independently and more or less simultaneously by multiple scientists and inventors.

Loop.pH specialise in the design and research of environmentally responsive textiles & structures for the built environment.

A resource hub about climate change for artists, writers and activists

On a graphical interaction surface