This project will fund the production, via crowd sourcing, of a never-before-released translation of Herman Melville's classic Moby Dick in Japanese emoji icons.

Each of Moby Dick's 6,438 sentences will be translated 3 times by different Amazon Mechanical Turk workers. Those results will then be voted on by another set of workers, and the most popular version of each sentence will be selected for inclusion in the book.

Here is a sample of a test run I've done on the first couple of chapters:
In the book, the sentences will be arranged with the Emoji on top of the page and the English sentence at the bottom. 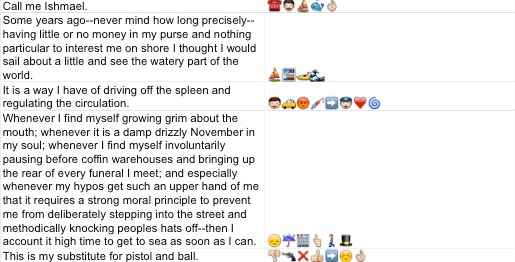