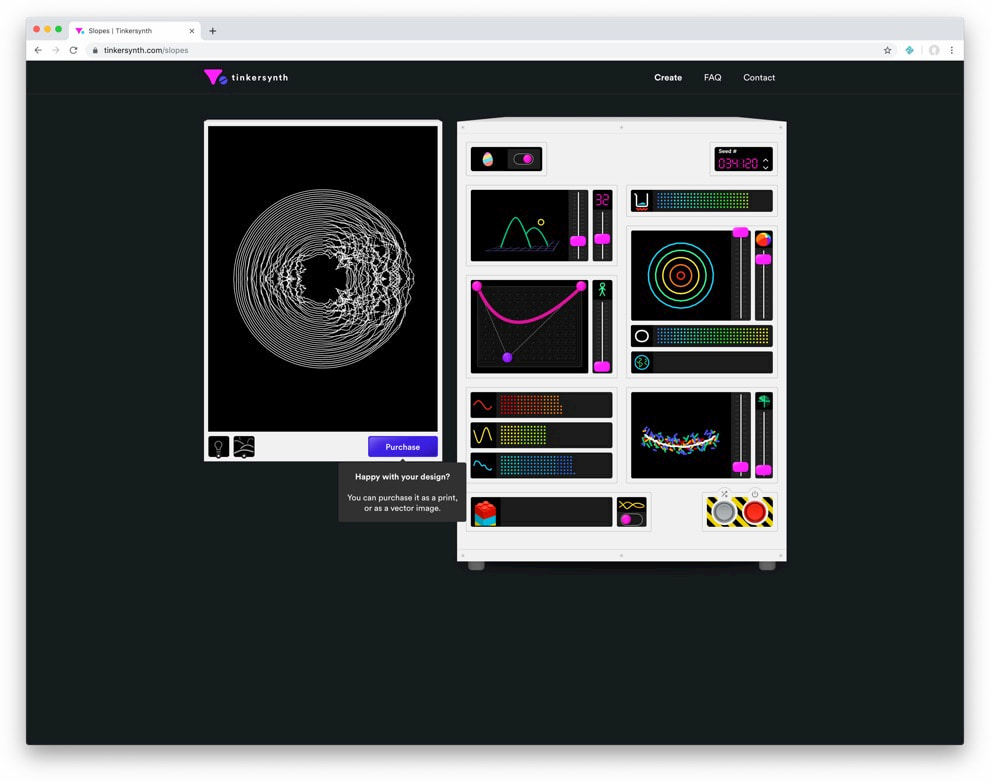 Tinkersynth is an experimental art project. It lets you create unique generative art
by making serendipitous discoveries through experimentation.
More concretely, Tinkersynth is a design tool where you build art by poking at sliders and buttons. The goal isn't to provide a linear path to a specific piece of art, but rather to encourage experimentation. Tinkersynth prioritizes being delighted by unexpected effects rather than creating an intuitive, predictable tool.
In a former life, Tinkersynth was also a store which sold the rights to digital products, as well as physical fine-art prints.
Tinkersynth was created by me, Josh Comeau.

Cables is your model kit for creating beautiful interactive content. With an easy to navigate interface and results in real time, it allows for fast prototyping and prompt adjustments.

Working with cables is just as easy as creating cable spaghetti:

You are provided with a given set of operators such as mathematical functions, shapes and materials.
Connect these to each other using virtual cables to create the scene you have in mind.
Easily export your piece of work at any time. Embed it into your website or use it for any kind of creative installation.

This is the official on-line repository for the code from the Graphics Gems series of books (from Academic Press). This series focusses on short to medium length pieces of code which perform a wide variety of computer graphics related tasks. All code here can be used without restrictions. The code distributions here contain all known bug fixes and enhancements. graphics images research software
http://ngemu.com/threads/a-novel-approach-to-depixelizing-pixel-art.143121/
Dribbble - What are you working on?

Video-mapping show on the Astronomical Clock in Old Town Square that celebrates the 600th anniversary of the construction of the clock.

The works of Roel Wouters

Made by mark coniglio

Programming language for images and videos

All their works, videos

The Exploration of Computation