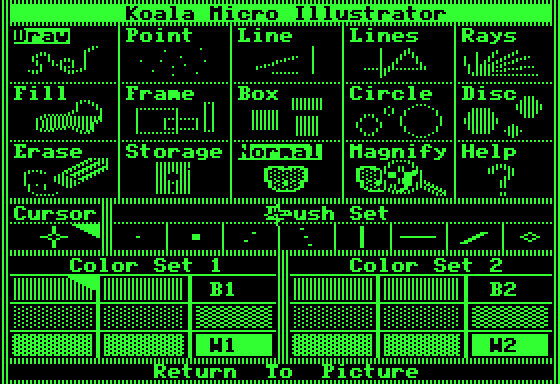 This timeline is the result of researching the origins of digital paint and draw software, and the tools that were developed to allow for hand manipulation (versus plotter drawn) drawing and painting - the mouse, light pen & drawing tablet. If we look at the software that has become commonplace today (such as adobe photoshop), which allows for painting, animation and photo manipulation in one, we can trace the roots of this software to the University and Corporate Labs that housed large computers with advanced capabilities for their time - MIT Lincoln Labs & Radiation Labs, DARPA & the Augmented Research Centre (ARC), Bell Labs, NYIT’s Computer Graphics Lab, Xerox Palo Alto Research Centre (Xerox PARC), NASA’s Jet Propulsion Labs (JPL). The artistic collaborations that grew out of these labs fueled the advent of Computer Graphics, Computer Art and Video Art from the 1960's to the 1990's.

This visual timeline starts by tracing the paint systems, frame buffers, and graphic user interfaces created out of these labs, with a focus on the first paint/draw software and the various drawing tools. I am interested in how the larger corporate, and often Military Funded laboratories, effected the dawn of the personal computer and the introduction of the personal computer to the home. This timeline continues through the 1980’s, with a focus on the software and hardware that was developed for the home market from late 1970's to the 1990's.