Strike is a web-based, 1-bit paint tool, primarily for quick sketching or line-drawing. 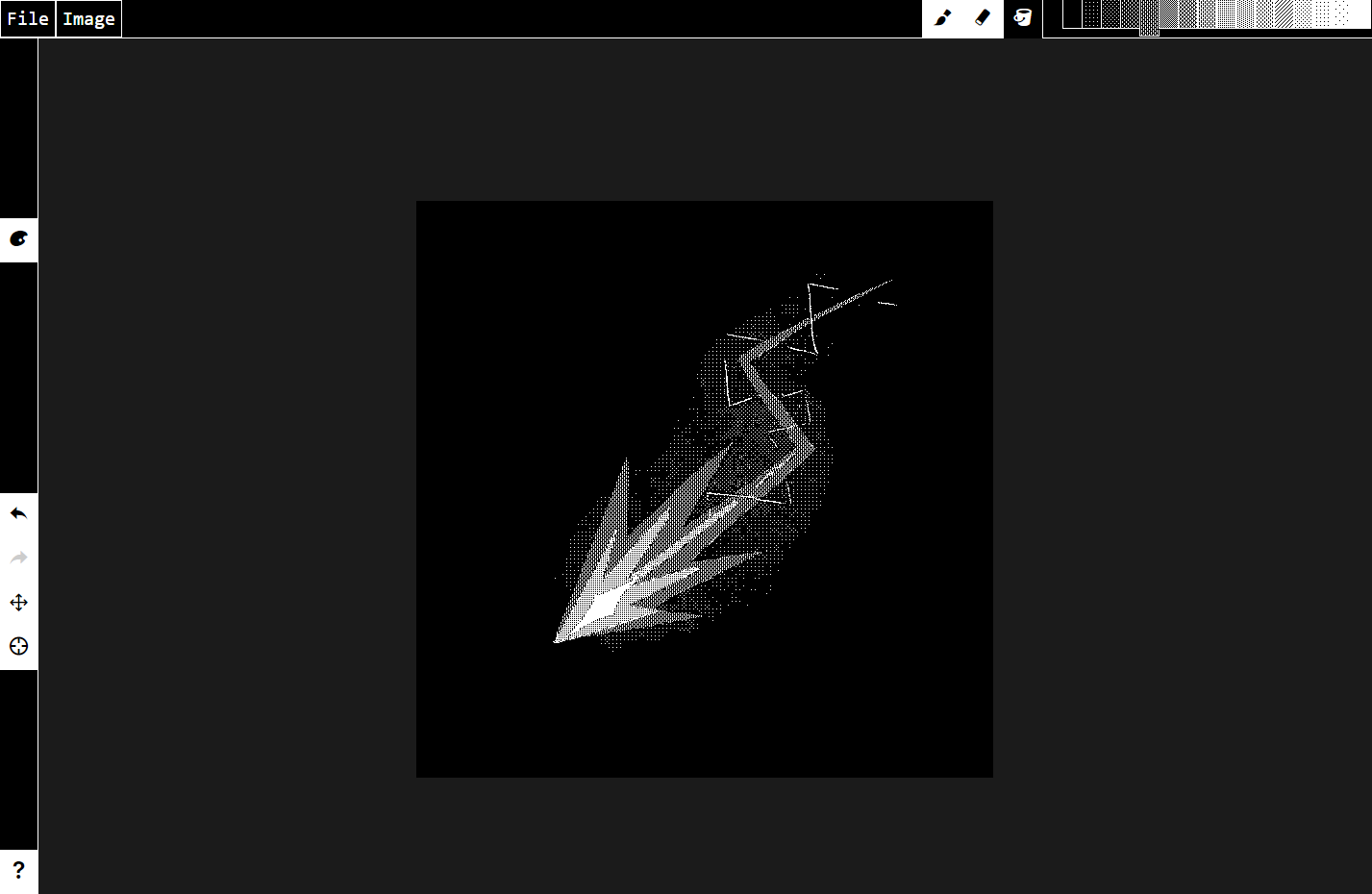 Welcome to Lospec, a home for digitally restrictive art. We create online tools for people creating pixel art and other restrictive digital art.

In the early days of computers, memory and storage space were a valuable commodity. Old hardware had very little space, every possible bit had to be conserved. Screen resolutions were small, and could only display a limited amount of colors. Music was stored as a sequence of notes rather than a single audio file. Games and programs had a maximum amount of space they could use, and they had to work within that restriction. Games made for the Atari 2600 could only be 32 kilobytes in total, including graphics, sounds, programming, levels.

Some people might view these restrictions as inconvenient, something that can only hinder your creative process. But there are many benefits to creating art within restrictions. Sometimes they simply help your get over art blocks by giving you a place to start, or help you use a consistent style throughout a piece. They can also force you to think in ways you might not have before and find creative ways to represent your vision. Your goal changes from "how can I best depict this subject" to "how can I best depict this subject within these limitations". You start thinking about the design, and level of detail. You are forced to simplify and prioritize, and consider the piece as a whole. It changes the whole creative process and forces you to think about your art from a new angle. The process of creating pixel art is completely different from even similar art forms like digital painting.

Some artists may impose restrictions upon themselves purposefully just to take advantage of these benefits. Some restrictions are just a result of that art form, like the canvas size of a painting or material of a sculpture. In Digitally Restrictive Art, the restrictions are brought on by the fact that they are stored digitally and is usually based on how the data is saved.
Pixel Art - The most popular digitally restrictive art form, as it was the only option for graphics on early video game systems. Though it's not required any longer, many games today still utilize pixel art due to it's aesthetic appeal, simplicity, and relative ease of creation. A large community of artists and fans still exists around the net.

Voxel Art - A more recent creation which is essentially a 3D version of pixel art. Instead of being made up of squares, it is made up of cubes. It's visuall similarity to pixel art makes it look like something out of the early computing days, but in reality only recently have computers been able to handle voxels.

Ascii Art - Similar to pixel art, but instead of being made up of pixels, everything is made up of ASCII characters, like letters and numbers. Before computers could even display pictures, artists could create images out of text. It was mostly notably adopted by the hacking community for use in text files.

Low-poly 3D - 3D models are typically made up of thousands of polygons, connected at their edges to create 3D shapes. In modern movies and games there are typically so many polygons that you can't see them and they look like a smooth surface. But in the early days of 3d, artists were limited to very few polygons. Low-poly models are still occasionally used in games today for memory restrictions as well as aesthetics. A subset of low-poly 3D includes using pixel art for the textures, adding another layer of restrictions.

Chiptune - Storing audio digitally actually takes quite a bit of space. Rather than reducing the length or quality of a song, early digital composers created a way to store songs as notes, which are then played at specified times, essentially being performed live by the computer. There are many different formats of digitally restrictive music that offer a whole array of different features and sounds. Midi files for example have a preset group of instruments you can assign to each note, and MOD/XM files let you create your own instruments out of waveforms.

Pixel-art scaling algorithms are graphical filters that are often used in video game emulators to enhance hand-drawn 2D pixel art graphics. The re-scaling of pixel art is a specialist sub-field of image rescaling.

As pixel-art graphics are usually in very low resolutions, they rely on careful placing of individual pixels, often with a limited palette of colors. This results in graphics that rely on a high amount of stylized visual cues to define complex shapes with very little resolution, down to individual pixels. This makes image scaling of pixel art a particularly difficult problem.

A number of specialized algorithms[1] have been developed to handle pixel-art graphics, as the traditional scaling algorithms do not take such perceptual cues into account.

Since a typical application of this technology is improving the appearance of fourth-generation and earlier video games on arcade and console emulators, many are designed to run in real time for sufficiently small input images at 60 frames per second. This places constraints on the type of programming techniques that can be used for this sort of real-time processing. Many work only on specific scale factors: 2× is the most common, with 3×, 4×, 5× and 6× also present.

A short list, ordered after output quality and setup time:

Photoshop: The newest PS version (19.x, since October 2017 release) also has a new upscaling method, called "Preserve Details 2.0 Upscale" but compared to SRGAN the results clearly lack sharp and fine details. You have asked for an App and PS is easy to use and can be automated.

Overview of the most popular algorithms:

image pixel programming software
https://en.wikipedia.org/wiki/Pixel-art_scaling_algorithms
"Pixel art" made in 1910, to create a pattern for fabric 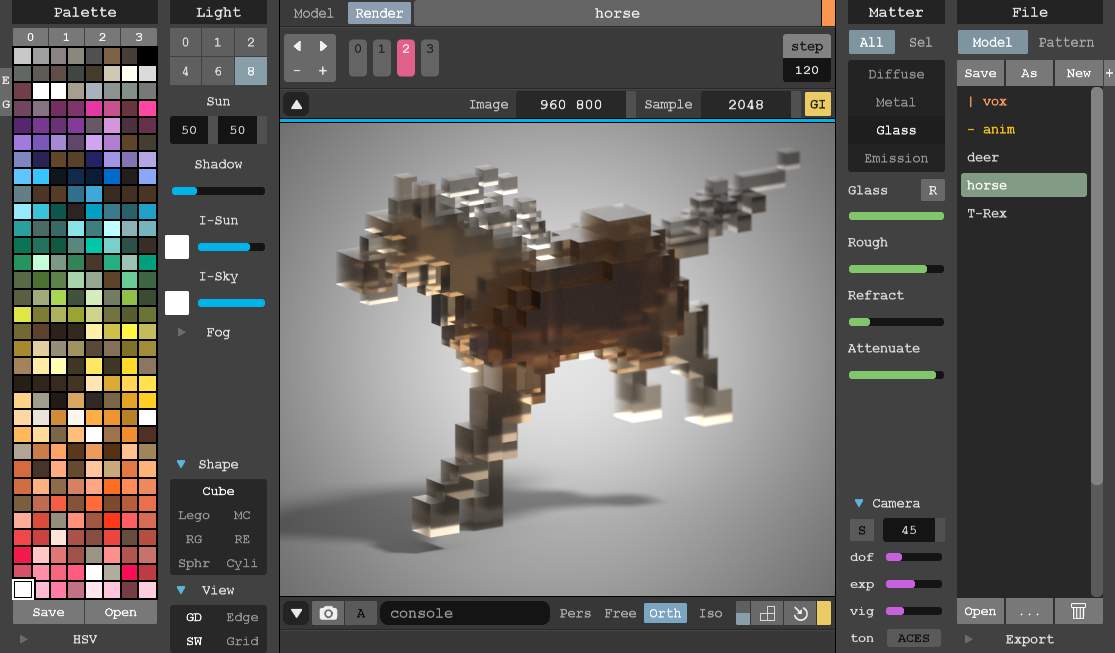